On the second day of our visits to Irula villages, tour organizer Robert asked me about the experience, both to check in with me but also to get feedback on the tour itself. (It had been a primary goal of Robert and Nancy to get us out to a rural setting and to sit and swap stories in a non-performance platform context).

I told Robert that to listen to stories while sitting in the shade of a tree in a rural village in India was, in one sense, exactly why I had come on the trip. That very morning, in fact, as we were being served coconut water (a young coconut with a straw in it) and listening to stories, I nudged the person next to me. "We're listening to stories under a banyan tree. In India. Can you believe it?" 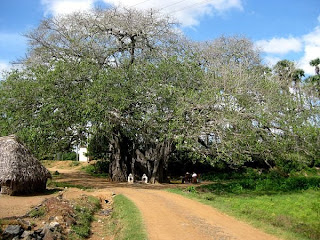 Banyan tree storyswapping venue,
Irula village near Chengalpettu,
photo by Jeff Byers.
After all the hassle of arranging travel, the long trip itself, the jet lag, the crash course in narrative arts of Tamil Nadu (including epic songs, the Mahabharata, bharatanatyam, and kattaikkuttu), sightseeing, living out of a suitcase, language barriers, and the media frenzy leading up to the November 4th election-- after all that, the story swapping in villages was a chance to experience life in the present.

A chance to pause... not just to enjoy stories, but to live life in real time.

Granted, it's not necessary to travel 9,000 miles away from home to grab a respite from the hustle and bustle of a modern lifestyle. And certainly to make a such a journey for the purposes of experiencing storytelling was a gamble of expectations. None of us, including the tour organizers, knew how the story swapping would work out.

(I can imagine the conversation at the tourism bureau: "The Americans want to go where?... They're coming all this way and want to visit the tribes... just to listen to stories?... What on earth for?")

So there we were. After brief tours of the villages, we'd gather in a group. We would sit and listen. Our village hosts graciously served us tea, and snacks. We whiled away the hours listening to stories, and some of our group had the chance to tell stories to the villagers.

In contrast to the epic stories of the Hindu religion we'd experienced in Chennai and the kattaikkuttu school, here we heard animal fables and local sacred stories, mostly from the women. One notable exception was when the village headman condensed a four hour sacred story into a 45 minute telling for us... despite the editing, he still found the story so powerful that he went into a trance state at the emotional peak of the story (We followed the lead of his wife and just waited patiently for him to return to us).

In the village with the banyan tree, locals sheepishly admitted they didn't know any traditional stories. Oakland storyteller Liz Nichols then asked them, through a translator, if they might share any stories about their grandparents. We quickly got two fascinating local legends about relatives who could go into trance states: one story about a woman who could predict epidemics in this way, and another about a man who could summon tigers.

We didn't speak their language, we could barely fathom their way of life. We got only a quick overview of their recent history: The Irula are a tribal community with thousands of years of indigenous knowledge of the forest, but the villages we visited were government resettlement projects. In recent decades, forest conservation laws made extraction of forest resources illegal, and apart from a few worthy efforts of non-governmental organizations to develop traditional knowledge into economic engines (snake venom extraction labs, herbal plant nurseries), most of the Irula are agricultural day laborers. Some of the women told us that they never took visited the nearest town (just a few kilometers away), because they could not read the numbers on the buses or the signs in the shops. If they braved the journey, they required their school-educated children to guide them.

But we sat down with them and listened. Sometimes life in real time doesn't provide the ideal venue for swapping stories. Real life can mean heat, humidity, dust, mud, goat droppings, snakes (the Irula are known as snake-catchers, and several men were happy to show off their recent finds), cell phones (in rural communities, it's easier to leapfrog landlines), children coming home from school. I recently played back video from one swapping session and what you can hear most clearly is the bleating of the village goats and clucking of chickens. Some of the younger children wanted to touch us white folks, or engage in various versions of peek-a-boo. During one swap, a group of boys realized the grown ups were otherwise engaged and began throwing rocks at each other just outside the storytelling circle. In another, the village alcoholic, attentive to the stories, felt compelled to make the session an interactive one. His outbursts were deftly and good-naturedly handled by our translator.

Sitting under the trees in rural India was picturesque, but it's also far from luxurious. Some of our group had health issues, which meant sitting cross-legged on a straw mat on the ground for two hours was far from ideal (chairs had to be hauled in from homes and schoolrooms).

But despite the challenges... of culture, of language, of lifestyle, of venue... such an experience really drove home the essential elements of what it means to be a human being. Because despite all the differences, were able to find common ground simply by being willing to listen to and share stories.
Posted by Tim at Tuesday, December 23, 2008 3 comments: After our trip to the Kattaikkuttu school, we headed out to the countryside. We joked about going to the jungle (and if any lingering tensions within the group might turn into a Lord of the Flies moment), but it turned out to be mostly scrub forest (and thus the accidental geography of vegetation prevented our small band of travelers from devolving into anarchy).

As part of our desire for cultural exchange, and the government's and local NGO's to develop cultural tourism, we visited several Irula villages (the Irula are one of the aboriginal peoples of India who trace their ancestry back before Dravidian migrations) and got to swap stories.

In this photo, San Francisco storyteller Jeff Byers is sharing a story with the women of Chenneri, an Irula village in the Chenglepet district of Tamil Nadu. Storyteller Jeeva Raghunath translated between Tamil and English for us.

The story swaps were a highlight of the trip for me, and I'll be posting more thoughts on this portion of the trip soon.
Posted by Tim at Friday, December 12, 2008 1 comment: