I've been so wrapped up in watching storytelling online lately, that I had to take a breather tonight and head out to see some real, live storytelling.

So I headed across the bridge to the Climate Theatre, a cozy 50-seat black box in San Francisco, to see Fireside Storytelling, a new monthly series of personal storytelling.

I had a great time--despite the fact that, as you longtime readers will recall--I don't even particularly like personal storytelling as a genre.

Six storytellers plus a story from the emcee. A theme, tonight's was "I faked it," which was interpreted in a variety of ways by the tellers.

Why did I enjoy the show so much?

The enthusiasm of the producers. The cozy feeling of gathering in a small room to hear stories on a rainy night. An aesthetic of "sitting up late at the kitchen table with really interesting people." A lack of polish (but not a lack of confidence). A chance to see storytelling in its natural habitat... okay, it was on a stage, under theatrical lighting... but from people who hadn't crafted the story as part of an eight week class, or a day-long workshop... just people who the producers knew were good at telling stories from their lives.

I suspect this series, just three months old, could well become a beloved institution in San Francisco.
Posted by Tim at Wednesday, March 31, 2010 No comments:

Random department: If you search on the name "Willy Claflin" on YouTube, you get about 19 results. Most are of storyteller Willy Claflin singing a song, or telling a story. But you also get this:

=====
Update March 16: the original video was removed from YouTube, so you can't repeat the search results oddity anymore.

I still have no idea why a live performance of the song "1 년 정거장," or "1 Year Station" sung by G-Dragon showed up in the search results.
Posted by Tim at Thursday, March 11, 2010 1 comment: 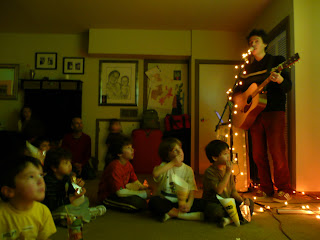 A few weeks ago I had the pleasure to attend a house concert in Oakland, California, to see singer/ songwriter Morgan Taylor. He introduced me and my children to a live version of the Gustafer Yellowgold experience.

Morgan sang and played guitar live, with tunes bringing to mind the songwriting of David Bowie and the Beatles, as if arranged for Seals and Croft, England Dan and John Ford Coley, and Al Stewart). Of course I fell under his spell: I'm exactly his demographic.

But there was a difference from a typical house concert featuring a musician: Morgan stands next to a screen, and from his laptop produces not only backing tracks (bass, keyboards, drums) but animated illustrations of the characters that he sings about or sings as.


The music is well-crafted (great hooks, thoughtful arrangements) and the animated illustrations bring the songs to life, aiding in the visualization of the strange and wonderful denizens of the mythology Taylor has created. But here's the key, for me: the content of the songs are Alice-in-Wonderland strange, and the illustrations help to make that accessible. So music and image work together, but the flow of the evening... the connective tissue of the world Taylor has created... is story. Songs seemed to inspire characters, character inspires songs, but in fact the evening worked because Taylor, in between songs, gave us matter-of-fact-ly delivered explanations of the details of Gustafer Yellowgold narrative: how he came to Earth, where he landed, what his brother does, how he spends his time. Each detail accumulates to build a story.

I'm late to the party on this one (hat tip to my brother): AlternaDads, librarians, and kindie rock aficionados have known about him for years, but here's what struck me the most, while watching the performance: Taylor is actually a traditional picture-storyteller, continuing on a tradition like the picture storytellers of India (a tradition dating back 27 centuries), Pardehdari in Iran, and the art of kamishibai in Japan. He's part of a small group of modern day performers whose live performances depend on a lively interplay between visual images and the told story (in this group I'd include performance artist Laurie Anderson, cartoonist Ben Katchor, and Fringe Festival favorite Barry Smith).

Catch up on Taylor's touring schedule on the Gustafer Yellowgold website.

One more thought: I am reminded of my trip to India, where our storytelling tour kept encountering references in song and in image to the Ramayana... which most of us had not read from beginning to end... and so we learned the story by accretion of details. In the same way, the story of Gustafer Yellowgold, is pieced together through songs and videos. As far as I know, there is no definitive Gustafer text (i.e. you can't read his story from A to Z, though obsessed fans could, I'm sure, put the songs on a timeline)... but here's my wish: that someday Taylor gives us Gustafer's monomyth--the hero's journey--because I would love to follow Gustafer on a sequenced narrative (and, hey, the younger kids... sequential patterning... not a bad conceptual ride for the pre-reading crowd to go on). I suspect the care and attention that Taylor has put into the "color" of his mythos has left me hungry for more plot.