Interview with a Rock and Roll Storyteller

Following up on my earlier review of "Dizzy Miss Lizzy's Roadside Revue presents Finn McCool," I'm sharing an interview with one of the company's founders, Debra Buonaccorsi. First, here's a description of how D.M.L.R.R. describes itself:

Dizzy Miss Lizzie’s Roadside Revue is theatre and vaudeville. It’s rock and roll, bluegrass and Americana. It’s the spirit of Woody Guthrie and the dustbowl wrapped up in a gyspy punk. The spirit of the vagabond and the rebel. They are the voice of human kind’s savage soul. It’s pure storytelling with bare hands and authentic voices. Storytelling cranked up good and loud through a Telecaster and a Marshall amp.

DMLRR was founded in Washington DC by veteran actor/musicians Debra Buonaccorsi and Steve McWilliams. Led by their common love for theatre, rock and roll, and the traditions of American music and storytelling, they sought to bridge the gap between a night at the theatre and a rock concert. 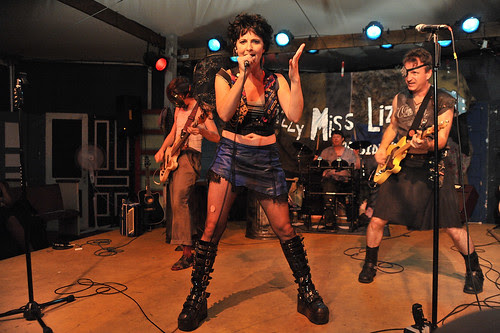 How did you first hear about Fionn mac Cumhaill? And what was the inspiration to bring his origin story to life with a rock and roll show?

It was an idea that Steve and I had been tossing around for a while- we'd never nailed it down to one particular Irish legend. I was into all things Irish in high school- literature, music, culture, Bono etc… and my sister, upon returning from a trip to Ireland, brought me a book called Gods and Fighting Men, which was a book of Irish Mythology compiled by Lady Gregory (a good friend of William Butler Yeats). The stories were odd and funny, as mythology usually is, but they stuck with me. When my good friend Laura Keena, the actress who played the Druidess Bodhmal in the show, brought Finn McCool up as a possible subject for a DMLRR show, I was instantly inspired. Laura’s parents have this amazing wood carving that they brought back from their honeymoon in Ireland, of the Finn McCool legend. It has the faces of Finn and Finneces carved out, there’s a salmon in there somewhere. So, the Laura and I set off to googling Finn McCool, and called Steve. Being of Irish descent and having spent time in Ireland, Steve was familiar with Finn and loved the idea.

Rock and roll is an essential part of the DMLRR aesthetic. There is something so “everyman” about rock music. It’s unpretentious, unadorned, high energy, it’s visceral and cuts to the chase. That’s why we feel it suits us and our storytelling. The extra added bonus of Irish legend and rock music is that there was so much inspiration in Irish music and Irish rock music. The Irish have been telling great stories through music for centuries- so we thought it was a perfect marriage.

Did you consciously view this show as storytelling, as opposed to a rock opera, or a musical, or a live concept album?

We hate to think of ourselves as musical theatre. We do have the concept album in mind when we’re writing. We’d like all of our music to be able to stand alone as a concept album, without a script, in the tradition of The Who’s Tommy or Pink Floyd’s The Wall. We do think of ourselves as storytellers. It gives us license to have fun and play and interact with the audience; it frees us from the confines of “theatre.”

Were you worried about the audiences knowledge of this story (or lack thereof)?

Maybe we should have been more worried. There was a mention in a review about “barely decipherable Irish names.” That’s never stopped people from understanding Chekhov, and those are barely decipherable Russian names. Most of the negative comments about the show have been about the confusing story and names. I thought it was pretty simple stuff. We’re thinking in the re-write that we would add a story song to get all of the necessary exposition and background out. We’re also thinking of using multi-media “cave painting” -esque drawings to assist in that area.

What does the rock and roll revue format give you artistically that traditional musical theatre doesn't?

Both Steve and I have spent a lot of time in the musical theatre world and we both have grown dissatisfied with its limitations and conventions and we question the cultural relevance of musical theatre as an art form. We started out trying to tap into the traditions of vaudeville and burlesque—“low” forms of entertainment and we’re both rock and rollers—also considered a “low” form—in fact, I recently heard rock and rock described as a “derivative” form of music. Which I had to laugh at: what isn’t derivative? We’re all walking derivatives. Anyway, as I said earlier, the rock and roll revue format gives us freedom to have fun and be loose. There’s so much energy and immediacy in a rock show. Someone once said after seeing one of our shows, that we weren’t acting like we were having fun: we WERE having fun. Steve and I call Dizzy Miss Lizzie’s Roadside Revue our playground. We simply invite others to come and play with us on our playground. You can play with us, or if you don’t like our games, you can take your ball and go home.

If you live in or near the Washington DC area, you can see the show again in 2011: DMLRR has recently completed a Kickstarter fundraising campaign to self-produce "Finn McCool" in March at the Woolly Mammoth.