Rather than stick my foot in my mouth again with any commentary (snarky or otherwise) regarding a storytelling event two thousand miles away, I'm just going to point to producer Don Hall, who has posted his round-up of his Skald 9 Festival in Chicago over on his blog.
Posted by Tim at Monday, June 23, 2008 No comments:

Storytellers: Who Speaks for You?

Partly that's historical: the storytelling revival of the last thirty five years didn't blossom from the performing arts community. If I recall my Sobol correctly, it springboarded off of the traditions carried forward by librarians, folk artists, and the entrepreneurial ambitions of an Eastern Tennessee high school teacher.

But every performing artist starts out focused on their art and craft, their technique and their inspiration. Hopefully, as they mature, they realize the need to broaden their perspective to learn where their art form came from-- and its current state in the cultural milieu.

Scott Walters, a noted theatre blogger (and a professor of drama at University of North Carolina Asheville) had this to say in a recent followup to his visit to the NPAC gathering:

There is another conference in a few days at Americans for the Arts, another organization that can open your mind. But like NPAC last week, the conference at Americans for the Arts will most likely have few artists in attendance. Conferences are expensive, and if you are an artist you may not have the wherewithal to attend one. But I would also venture that, for many artists, there is a lack of interest, a sense that such concerns are "academic" (by which is meant, in our anti-intellectual society, "irrelevant"), and that thinking about the larger issues surrounding the arts is unproductive.

If, as so many people say, theatre has become irrelevant (and I don't think it has; I think it's relevance has gone underground during the tornado of triviality that has swept through the last 25 years) it may be because theatre artists, in the desperate need to simply survive, have lost an awareness of the larger world and their place in it. And what is best about a conference such as NPAC or Americans for the Arts or AlternateROOTs is that you are reminded of your own potential and your own importance.

(As with all my quotes from theatre blogs, replace "theatre" with "storytelling" and read it again.)

All this to say: we performing artists can't wait for someone else to step up to the national conversation on the arts. We're it. Precisely because there are not robust institutions that support storytelling on a national or regional level (key word: robust), it's definitely up to individual artists to step up and join in the national conversation on the arts. In a perfect world, I'd want the administrators, the executive directors, and the university professors who bolster the storytelling community to be leading this charge-- but that's, what, maybe 8 people nationally?

(I confirmed that none of NSN's board attended NPAC. Too bad, since this is precisely the time when NSN is struggling to come up with a viable organizational model.)

American for the Arts Conference link
Posted by Tim at Friday, June 20, 2008 No comments:

How'd I miss this?

The National Performing Arts Convention took place in Denver, Colorado on June 10-14, 2008. "Taking Action Together," NPAC sought to lay the foundation for future cross-disciplinary collaborations, cooperative programs and effective advocacy. Formed by 30 distinct performing arts service organizations demonstrating a new maturity and uniting as one a sector, the convention was dedicated to enriching national life and strengthening performing arts communities across the country.

So the theatre service organizations were there. So were the orchestra, dance and opera service organizations. In fact, they held their national conferences concurrently in Denver. The conductors were there, the chamber musicians were there. The music critics. The manager and agents. The university theatres. The composers. The producers. The dramaturgs and literary managers. The teachers. The grantmakers. The folkies. The lobbyists.

Three guesses as to which performing art that I'm a big fan of wasn't at the table (presumably because we don't have a viable "service organization" at the national level).*

NPAC did schedule several solo performers who claim the mantle of storyteller, including Mike Daisey and Red Feather Woman. The only mention of storytelling in the Program Book (which you can download from the convention website... (hi-res version is 7.9 MB, it's 122 pages long)... imagine that... a conference that releases an electronic copy of their program book to anyone who wants it, not just attendees) was in Will Power's workshop on hip-hop.

NPAC Official Blog.
The NPAC blog at Artjournal contains a lot of the thinking that went into the planning of the conference, especially as to big picture topics for discussion, as well as reporting on what went on, and what will happen going forward. I'll probably spend some time here to mine some fodder for Breaking the Eggs. Also, lots of links to bloggers covering NPAC, so there's more to explore.

* There were nearly 4,000 attendees, so I'm hoping that someone from the o.g. storytelling community went. Anyone? Anyone?
Posted by Tim at Wednesday, June 18, 2008 4 comments: 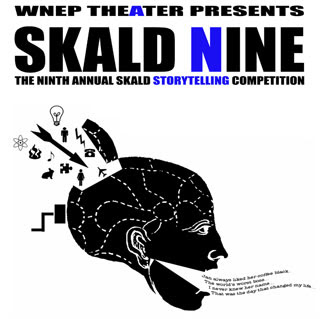 I've already posted how much I love SKALD, Chicago's premiere storytelling festival, despite never having seen it.

Then report back. Since I'm in California, I'm going to miss the performances. I'd love to hear about it.

The closest I have to eyes on the scene is Don Hall, and while he tells it like it is, he is also, in fact, SKALD's producer.

Congrats to Martha Escudero and her fellow storytellers over in Barcelona. Her YouTube Channel just made the midday news in Barcelona (you can skip ahead to 1:15 in the clip, from Televisió de Catalunya) as a must-see online destination.

Since Canal Narradores (that's "Storyteller Channel" in English) came onto YouTube 9 months ago, it has set the standard for quality production for traditional storytelling on YouTube. Even if you don't speak Catalan or Spanish, check out some of the storytelling videos. Not knowing the words, you'll actually learn a lot about gesture, voice, inflection, and pauses... and what works on the small screen. You can also see how quality sound, lighting, and camerawork enhances the performance.

And if you're going to be in Barcelona, don't miss Martha's storytelling series for adults, Contes i Cuentos, at the Harlem Jazz Club.

(Learn more about Spanish and Catalan storytelling at the ANIN, (Associació de Narradores i Narradors) website, which includes a directory, links to storytelling festivals and groups, and articles from their past newsletters.)