Another storytelling organization looks at their finances and makes some changes. Email today from Elizabeth Ellis, President of the Board of Directors of the Tejas Storytelling Association:

As a belt-tightening measure in response to the current economic situation, the Board of Directors of the Tejas Storytelling Association has eliminated the position of Executive Director and has become an all volunteer organization. This step will allow us to move toward a healthier economic future for our organization.

Christin Thomas has served as Executive Director for four years. We are grateful to her for her work on our behalf and wish her every success in the future.

We are grateful to you, our supporters, for your past support. We look forward to working with you more closely in the future as we continue together to support storytelling and the Tejas Storytelling Association. Please be patient with us during this time of transition.

Sue Black of Naperville, Illinois, is a storyteller and teaching artist, enthusiastically sharing her passion for telling and writing stories with audiences of all ages. She has graciously given me permission to reprint the following story, which originally appeared on the Storytell list.

ONCE upon a time there was a storyteller whose name was Jack, and he lived with his fellow storytellers in a worldwide community. They were very poor – some of them, moderately successful –others, but the storytellers worked hard and made a living by spinning tales.

Jack was busy living and writing and telling and listening and following email, twitter, and facebook conversations. He thought maybe he would do nothing but bask in the sun in the hot weather, when he had a free minute or two, or maybe sit by the corner of the hearth in the winter-time. But there was always more work to be done, not just for himself but for others too, and it seemed as though free minutes were filled with thoughts of contributing to the greater good. After all, there were always calls and emails and letters and general announcements about events to support, conferences to run and record, workshops to produce, websites to host, and various other volunteer jobs that needed to be done. The community had needs and this roused Jack, and he went out and volunteered himself for the next day to a neighboring farmer; but as he was coming home he met his mother or his brother or his sister (that part of the story doesn’t really matter, I suppose). "Jack, what were ya thinking?" they asked. "You should have done it this way."

He knew there was more than one right way to get a job done and Jack was always willing to listen. "I'll do so another time," replied Jack.

On Wednesday, Jack went out again and volunteered himself to a cowkeeper. Again, as he walked home – feeling good about the work he’d done – Jack met up with some of his fellow storytellers. They admired his work, but couldn’t resist saying, "Jack, what were ya thinking? You should have done it this way."

By now Jack had a bit of experience in the matter. He felt good enough about the good work he was doing and the good of the work for the greater community, so he was able to slough off the criticism and simply say, "I'll do so another time."

So on Thursday, Jack volunteered himself again to a dairyman. Now this time Jack was paid for his services, not much, just a fine piece of cheese. In the evening Jack took the cheese and went home. By the time he got home he’d passed several storytellers who felt entitled to ask, after all Jack was getting paid, "Jack, what were ya thinking? You should have done it this way."

"I'll do so another time," sighed Jack.

On Friday, Jack again went out, and volunteered himself to a baker. When he got home there was an email waiting for him. It simply asked, "Jack, what were ya thinking? You should have done it this way."

Rather than send a reply with the words, "I'll do so another time’, Jack sat at his computer and stared in disbelief.

Ever persevering, believing he was doing what needed to be done, wanting to contribute and willing to accept some critique, on Saturday Jack volunteered himself to a butcher. By the time Jack got home it seemed as though his mother or sister or brother (that part of the story doesn’t really matter, I suppose) was this time quite out of patience with him. It seemed that way to Jack, anyway, that patience was gone and that his efforts were not appreciated. The mother or the sister or the brother was not really out of patience, but by then that part of the story didn’t really matter to Jack. And Jack knew there was a bright spot ahead, a happy ending, a princess and laughter and great riches not just for himself but to be shared with his mother and his sister and his brother and the greater storytelling community. But by then that part of the story didn’t matter anymore either. Jack was tired and discouraged and beaten down and had walked that fine line between service and greater good and needing kind words for too long.

So on Sunday Jack stopped. Rested like the good book said he should. And on Monday and Tuesday and Wednesday and Thursday and all the days that followed, the volunteer work did not get done. Jack was not tired by the work, but exhausted by the voices that drowned out the joy of service. And I’m sorry to say this is one of those stories that just might not end happily ever after.

(Ah, but read the comments for another storyteller's response)
Posted by Tim at Thursday, June 11, 2009 2 comments:

This sounds like fun: the first Sigana International Storytelling Festival in Nairobi, at the Alliance Francaise coming up July 3, 4, and 5. Eight storytellers, from across Africa, Europe, and the Americas.

Zamaleo ACT, the host of the Festival, as Kenya's premiere storytelling troupe, is a key player in the African storytelling revival, so expect a high quality lineup.

What's that you say? You don't feel up to speed on the state of the African storytelling revival?

Well, here's a quick peek at a recent storytelling festival in Nairobi: (link),
and here's a link to Ntshengedzeni Collins Rananga's 2008 PhD Thesis, "Professionalising Storytelling in African Languages with Special Reference to Venda" (PDF, 1.1 MB). Note: it's really thorough... and really good food for thought, no matter what country you're in. This 430 page tome is going to provide lots of fodder for this blog. Includes lots of interviews with African storytellers (sadly, though, names are redacted).

If you're going to attend the Festival, leave a comment below.
Posted by Tim at Thursday, June 04, 2009 No comments: 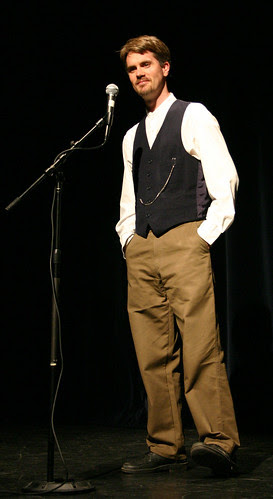 I first got to know Dale Jarvis by his online presence. He's one of the few storytellers with stories on YouTube. He's one of the even rarer storytellers who has ventured into the virtual world of Second Life. I admired his choice of repertoire (at least via what I could hear on his podcast)-- in fact, a Corsican ghost story ("Goldenhair") had me and my six year old son spellbound in the car convinced me that I would have to hear Dale live and in person someday. However, seeing as Dale lives some 3,476 miles away from me in St. John's, Newfoundland, I didn't see this as very likely.

As luck would have it, Dale and I chose to attend the very same storytelling conference in Green Lake, Wisconsin, this year (Strange to think that Reykjavík, Iceland, would have been a shorter trip for Dale. And hah! I win the prize for longest distance traveled... Berkeley to Green Lake is farther than St. John's to Green Lake by just 23 miles! (and I flew via Phoenix)).

At the Northlands Storytelling Conference, I finally got to hear Dale Jarvis in person, both at a Friday night performance and at his Fringe concert Saturday.

On Friday night he told a Newfoundland Jack tale which delighted the crowd. It was at once a novelty (none of us in the room had heard Newfoundland folklore before) and familiar (the story had familiar motifs of Irish and English wonder tales), and told with aplomb. Dale's telling style was masterful-- confident on stage, with a strong, clear voice, thoughtfully placed gestures, rhetorical flourishes that harkened back to an earlier era, a playful attitude toward the audience, and a deferential one toward the story.

His fringe show the next night introduced not only more Jack tales, but put them in context (after all, he's a professional folklorist): Newfoundland and Labrador has had European settlers for more than four hundred years. So the stories from their home countries like Ireland and England (and France, Portugal, Spain, etc.) have had time to be passed down through generations, evolving, slowly changing. And in a traditional economy based on fishing, with isolated communities, the oral tradition lasted well into the twentieth century. In Dale's telling, he leaves in the rhetorical phrases that old tellers would use (e.g. "and he walked and he walked and he walked and he walked") that you rarely hear anymore from modern storytellers who by and large are not oral/aural craftsmen, and build their stories from images and sentiment.

Dale told a Jack tale that he himself had heard from a elderly Newfoundland woman, who heard it from her grandmother. He's the real deal-- a folklorist who's passing along the oral tradition (instead of assigning it a number and filing it away in a dissertation somewhere). He can tell us stories collected in Newfoundland, he can tell us about how the story was collected, where and when it was collected (whether by himself or by folklorists from earlier times), and by whom.
When was the last time you got to hear a storyteller do that? It has become all too rare.

Dale also tells local ghost stories in St. John's, on haunted hikes, and he's still collecting them... he's even got a column in the local paper sharing supernatural folklore.

You can listen to Dale on this recent interview with three storytellers at the Toronto International Storytelling Festival: (link)

And here, to end this mash note, if you'd like to learn more about Dale-- check out Brother Wolf's interview with him on collecting ghost stories at The Art of Storytelling with Children (link), subscribe to Dale's podcast via iTunes or this page, or visit Dale's very own storytelling blog.
Posted by Tim at Tuesday, June 02, 2009 2 comments: