Kevin Kelly revisits his "1000 True Fans" hypothesis, in which he suggests that microniche artists could make a living from a limited fan base.

On his blog, he's beginning a series of interviews with artists who are using this very model, and the first one is ambient musican Robert Rich, who's been self-producing for 30 years. In his response, Rich tempers Kelly's enthusiasm with a hard dose of reality:

In reality the life of a "microcelebrity" resembles more the fate of Sisyphus, whose boulder rolls back down the mountain every time he reaches the summit. After every tour I feel exhausted but empowered by the thought that a few people really care a lot about this music. Yet, a few months later all is quiet again and CD/downoad sales slow down again. If I take the time to concentrate for a year on what I hope to be a breakthrough album, that time of silence widens out into a gaping hole and interest seems to fade. When I finally do release something that I feel to be a bold new direction, I manage only to sell it to the same 1,000 True Fans. The boulder sits back at the bottom of the mountain and it's time to start rolling it up again. 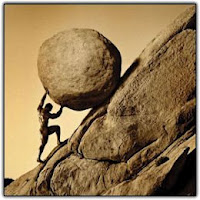