Two years ago I performed a story inspired by Jack and the Beanstalk-- a monologue from the Giant. I enjoyed creating that piece, but have not had an opportunity to tell it since that time. I will have some opportunities soon.

As I have been bringing the story back into the forefront of my consciousness, I realize that I need to operate. The performance captured on video, that's a beta version of the story. A preview of things to come. It's only now, two years later, that I'm carving out the time and energy to shape the finishing details of the story.

I called in an outside ear. I hired storyteller and story coach Nancy Donoval to do a dramaturgical intervention. I asked her a few specific questions I had about how the story comes across, what worked for her as an audience member, what didn't. (Yes, she's just one person, but I first met Nancy when she was a theatre director and I was an actor and I trust her critical eye/ear).

I took pages of notes from our conversation, and promptly laid them aside to let the feedback sink in. (No, really, I was thinking about her comments. I wasn't just putting off the necessary and uncomfortable work of editing).

Coincidentally, a few days later, storyteller Sue Black of Illinois shared her process of winnowing down a favorite story of hers to fit a venue's particular requirements. She took the challenge of bringing a "finished story" (13 minutes, 38 seconds) to where it could fit under ten minutes. "Shave three minutes?" I thought. "Ouch!"

She got it down to 8 minutes 50 seconds.

And then she challenged me to do the same.

Not just me... but all of us storytellers. Challenged us to a simple exercise. Take a story and pare it down:

Consider everything. Get rid of your ‘little darlings’. Throw away what you think is just too cute and everyone ‘must’ hear or their lives won’t be complete.
Delete, delete, delete and still maintain the essence of the story.
You’ll grow with the experience.
Your story will be better.
And your listeners will be glad you did.

Sue went beyond just sharing the news and issuing the challenge: she has posted the before and after texts of each version of the story.

See what you think. Did Sue's trimming improve the story?

I can see how the trimmed version is cleaner. Neater. Oh, but having read the earlier version, there are a couple of details I miss. A couple of Sue's 'little darlings.'

I'll admit: I have 'little darling' issues of my own. In college I wrote a one-act play (staged twice, at two different universities) that was a satirical allegory filled with jokes, puns, and arbitrary character choices. Clocking in at one hour and five minutes, it was thirty minutes too long, although at the time I would have denied it. A teacher of mine that I held in high esteem wanted to know when I was going to stop hiding what I wanted to say behind joke after joke and just say it. I never rewrote the play because for years I couldn't bring myself to take out the parts that amused me so much when I first included them. 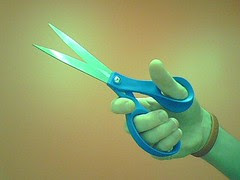 And now, as I turn my editor's eye and ear to my Giant's story, with the aim of tightening it up, and shortening how long it takes to tell, I ask myself, "what does the story need?"

And I can see that some of the very 'little darlings' that inspired the story to begin with are going to have to go.

There are also a few questions that Nancy raised about the story. Questions left unanswered. Some of them, I want left that way. But some of them, I don't want the audience to be thinking about-- so I need to add information to the story.
What's your experience with trimming the fat? And getting rid of your 'little darlings?'

well written article, Tim.
Northlands Storytelling Journal is looking for articles. this seems to be a pretty good one!
Sue