Before I continue with the shout-outs to various other blogs and web sites, I have to jump in with this reflection based on both an issue Sean Buvala raises about the defintion of storytelling, and a brilliant night of storytelling my wife and I caught last week. 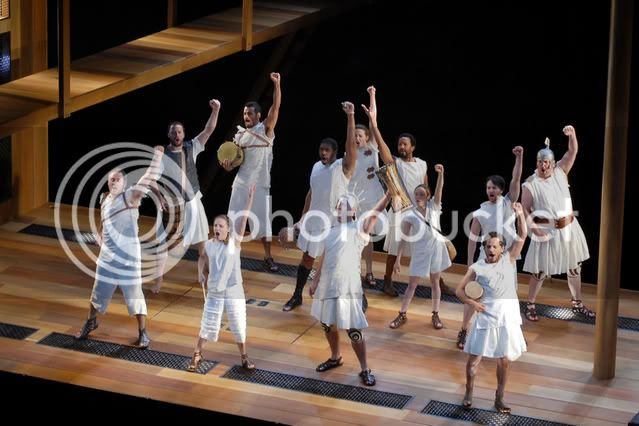 Mary Zimmerman's adaptation of The Argonautika, the ancient poem that re-tells the tale of Jason and the Golden Fleece, has been playing in town, at Berkeley Repertory Theatre. Mary's an old college friend and I'd go see anything she's directed. The two-and-a-half hour long production has been wowing crowds and critics alike.

Critics call the production full of theatrical wizardry... but Pat Craig of the Contra Costa Times, I think captured the show's appeal best: "...when writer-director Zimmerman spins the tale, it conjures memories less of musty schoolbooks and more of Saturday afternoon matinees and midnight campfire stories."

My wife and I both found the show one of the best performance events we've ever seen. But despite the fact that the show was produced in a proscenium theatre, I'd be hard pressed to call it a "play."

And in this, the effort was wildly successful.

It took a dozen people on stage (and a host more offstage) to share the tale of Jason and Medea. And Mary chose to use puppets, percussion, stagecraft, music, and drama to help in the telling of the story (But still, we, the audience members, were co-creators of the images of the story... the stagecraft did not try to re-create, but only suggest dragons, armies, storms, armadas).

That doesn't make it any less storytelling, in my view.

Granted, this type of storytelling does not fit into the storytelling circuit's model of concerts and festivals.

I can think of one, maybe two, "professional storytellers" who might, might, be able to get the same emotional wallop with this story.

The story was thrilling. It brought to life an ancient tale, while acknowledging our own modern day perspectives on fate, on war, on glory, on storytelling. It even acknowledges that we, as an audience, already know how Jason and Medea end up (most people in this theatre crowd knew the story of Medea... whether they knew the story of Jason and the Golden Fleece before entering the theatre was debatable...

I only knew it from the 1963 sword-and-sandals movie from Columbia Pictures (filmed in the miracle of Dynarama!) featuring the astonishing stop-motion animation of Ray Harryhausen. And you can be sure that Hollywood's version didn't exactly stick to the original story.)

For me, a listener who prefers ancient tales to "the day grandpa fell off the ladder," this was a remarkable evening of ensemble storytelling.

For me, it certainly falls within Sean Buvala's definition of storytelling:


Storytelling is the intentional sharing of a narrative through words and actions for the benefit of both the listener and the teller.

Some folks will say, well, no, it's theatre, not storytelling. They point to the costumes, the lights, the script. The sound design, the set, the choreography.

To me, that's like saying that modern dance isn't dance because it's not ballet. That Elvis Presley's oeuvre wasn't music because he didn't do it like Benny Goodman.

I understand the main objection of storytelling purists: that the conventions of theatre don't allow for spontaneous interplay with and reciprocal feedback with the audience.

But I was there. Sitting in a darkened space, with six hundred other people, transfixed, as an ensemble told us about Jason, and Pelias. Athena and Hera. Hercules, Castor and Pollux. Phineas. Aeetes. Medea.

They told us a story.

BTW, catch the 30-second trailer for the show on YouTube.
Posted by Tim at Sunday, December 23, 2007

That sounds like an amazing performance! As I read your post, I was thinking about Megan Wells--then I followed the link to her site. How oblique of you! She'll be telling Helen's Troy in April at Going Deep, the long traditional story festival. I can't wait to hear it again. Crystalline.

This whole question of what is and isn't storytelling is thorny, isn't it? In response to Sean's post, which was a response to yours, I made a feeble stab at it on my blog. I'm still not satisfied with it.

In all fairness, I have to say that the show was predominantly in the dramatic mode, and not the narrative mode, and clearly on that distinction alone, there are Aristotelians out there who would suggest that the production was prima facie theatre and not storytelling.

Also, a nod of the noggin to Mary Zimmerman, who, as a graduate student many years ago, taught me the distinction between lyric, narrative, and dramatic, in my very semester at college, in her Analysis and Performance of Literature.